Earlier this season, Sanchez kicked things off with a win at the Southlake Carroll Inv. and today, he completed things with a state championship run in Round Rock.

When the race started, there was no shortage of competitors ready to lead and challenge for the win. Near the half-mile mark, Sanchez was in third place with a whole pack of guys right there with him. He would make his way to the front by time they made the first turn on top of the levee. It was right at the mile marker when you could see him push up the hill.

That move up the hill was the first step to Sanchez closing the door on the rest of the field. However, with eight runners all within three seconds of one another, nothing was yet established.

With the two-mile mark approaching, a lead began to open and Sanchez would drive and push more until he crossed the two-mile in 9:33 with an eight second advantage that was growing until he finished with a 14:53 win. 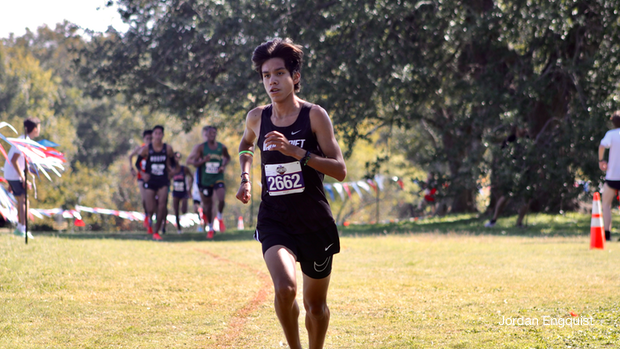 The team race was a wild ride and an entertaining one worth being the state meet finale.

Southlake Carroll won their second state title in as many years with an outstanding team performance. By their own admission, it wasn't as fast of a race as they would have like to turn in, it was still a gem despite the championship critical analysis.

Carroll didn't have a top 10 individual finisher and no low stick runner, but what they had was something everyone knew they had . . . a strong pack running squad.

David Fisher was the top finisher for the Dragons with his 18th place run in 15:39. He was closely followed by Jude Alvarez, Robert Freeman, and Hunter Hill who were all right behind him finishing within 11 seconds of one another. Logan Cantu was their number five scorer finishing in 34th place in 15:54 for a 15 second 1-5 split.

The Woodlands finished second overall with 96 overall points, which is one spot up on the podium from last year's finish. Senior Kyle Easton finished 11th overall with junior Pablo Lesarri in 15th place to lead the Highlanders; they finished with a 15:48 average.

The team race reached a dramatic point for the third and final podium spot. Two very talented teams had contrasting races. The finish was so close and confusing that even the timing system had trouble scoring the correct result. Initially, it unofficially recorded the reverse order needing a camera review.

El Paso Eastwood, who is used to running fast and tight didn't have the level of racing they were used competing at. On the flip side, Atascocita ran the type of race that if you were to teach a clinic, you'd teach the kind of performance the Eagles had.

Eastwood had a good team average with their 15:56 performance but they had a 1:16 split, which was atypical for them. Atascocita might not have ran as fast as they would have wanted to, but still averaged 16:00. This was the second straight year that Atascocita had an awesome state meet performance, but their 16 second split was almost other worldly.