Pierre Goree of Duncanville has the power and speed, but make no mistake, he has the SPEED.

Not only has Goree has been unbeatable all year long, but the guy has been running out of his mind producing 10.11, 10.10. and 10.09 like it's nothing. If this were a game, Goree would be a cheat code.

Isaac Henderson of Shadow Creek was another favorite coming into this race. This senior had such an incredible start it almost looked like he would have the gold in the bag but Goree had other plans.
Looking like he was running down a hill in the last 50m, Goree pulled away from Henderson over the last 10m. He didn't run 10.1 or 10.0, but the head wind clearly wasn't a problem to the Duncanville sprinter. Tr'Darius Taylor from Temple also ran a solid race to earn the bronze.
Goree in first ran a 10.22, Henderson got second and came in at 10.31, with Taylor getting the bronze with a time of 10.53.
- - - Julian Humphrey out of Houston Clear Lake brought his game and pushed the fast pace early on out of the curve. But it was a young sophomore out of Klein Forest by the name of Jelani Watkins, who ate up the home stretch to cleanly take first place with a time of 20.78. Watkins was in this race as a freshman last year and it looks like that prepared him for what he has displayed this entire year.
Tyriq Brunn of  Shadow Creek also made a big move with 20m to go and it paid off because he got second place. His time was 21.00 and Anthony Evans from Converse Judson edged into third placed with a time of 21.10.
Julian Humphrey made for an exciting race but couldn't hold on against insane competition. He finished fourth with a time of 21.44.
- - - 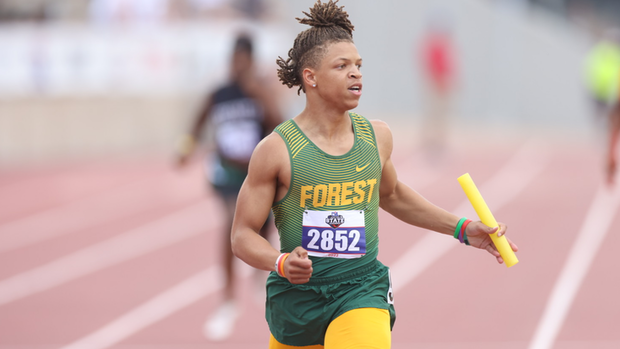 For the first time in a while we had a 400 meter final this fast and up for grabs. There were six boys coming in with 47s and Logan Popelka (Wylie) with a 46.99 from regionals.

The race was pretty much even through the 200m, but Darius Rainey and Popelka made moves on the turn that would cancel out the rest of the field.

The race would get interesting on the homestretch when Demarco Escobar (Converse Judson) who just anchored his team's 4x200 relay minutes earlier ran himself into medal position.

The determining factor would coming down to the strongest runner of the bunch. Despite winning gold in the 800m about an hour earlier it was Rainey proving to be the strongest.