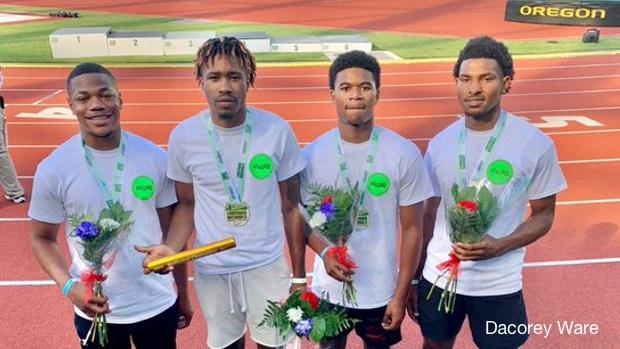 The NSAF has hosted the formerly New Balance Nationals Outdoor (NBNO); it was announced in May that it was going to be a Nike event held in Eugene, Oregon.

It has always attracted several top track and field athletes and teams for their competitions and divisions.

There were several Texans who went to compete coming away with a lot of top finishes and even a couple of national championships.

Here are some of the top performances from the NSAF Outdoor Nationals.

Texas got a jump on things at the NSAF Outdoor Nationals when Marble Falls senior and University of Oklahoma signee Kason O'Riley took the win in the high jump competition.

The 2021 UIL 5A state champion O'Riley didn't even enter the competition until 6-8.25 won with a bit of drama on the way to the top of the podium. It took all three attempts to clear 7-0.25, which was his winning jump. Had he missed that jump, he would have had to settle for third place. Instead, he came away with the win.

On the girls side of the event, it was Evelyn Lavielle from Houston Stratford was the runner-up at the TTFCA Meet of Champions. She jumped a 5-8.5 best for a fifth place finish at the NSAF Outdoor Nationals.

Houston Christian junior Abbie Hirth was the TTFCA Meet of Champions winner in the high jump. She jumped 5-6.5 at the NSAF Outdoor Nationals for a seventh place finish.

In the boy's 100m Championship race, San Antonio Roosevelt graduate Nazzio John finished a fantastic senior season at the NSAF Outdoor Nationals. John blazed through the prelims in Oregon with a 10.58 and then he had a masterful finish in the 100m finish; John finished third overall in a 10.33 wind-legal PR.

John showed how complete of a sprinter he is by continuing to improve in the 200m. He ran a swift wind-legal 21.01 in the prelims and added another podium finish with a 20.96 PR in the finals.

San Antonio Antonian junior sprinter Garrett Kaalund dabbled in the 200m by running in the preliminaries; he ran a 21.44 in the prelims that qualified him for the finals. The 400m is where Kaalund excelled. He ran nearly a full second PR for a second place finish in 46.88.

Killeen Shoemaker junior sprinter Khamari Terrell added another top finish for Texas with his third place finish in 46.92 in the 400m.

On the girl's side, it was another San Antonio sprint star who continued her outstanding senior season. Jasmine Montgomery added another championship to her resume by winning the NSAF Outdoor Nationals 100m. The San Antonio Reagan grad cruised a 11.49 prelim time and followed with a 11.44 to continue to show how  consistent she is.

Tomball Concordia Lutheran graduate Taejha Badal had a podium finish in the 200m. The Texas A&M University signee ran 23.74 to secure one of the last spots to the finals and didn't get a great lane position. That didn't matter to the experienced TAPPS sprinter as she ran a personal best 23.46 in the finals for a runner-up finish.

After collecting the UIL 5A state title, Fort Bend Marshall junior hurdler Tairah Johnson continued her hurdle progression at the NSAF Outdoor Nationals with her running in Oregon. Johnson qualified through the prelim round by going 14.13. That was a wind-legal PR and earned her the sixth fastest qualifying mark heading into the finals. That is where she stepped things up another notch by running 14.01 for anther personal best and top three finish.

Humble Summer Creek senior Barry Richards, another state champion was looking for a national title. The UIL 6A champion proved he was intent on having a good week when he dropped the best preliminary mark of 13.71. In the finals, he ran a 13.81 wind-legal, which was good enough for a third place and podium finish.

The Cedar Hill boys weren't satisfied with being UIL 6A state champions; they wanted to prove more. They did their job in the prelims by getting the stick safely around the track as fast as possible. Their 41.41 gave them the second best time heading into the finals only behind Cardinal Hayes (NY).

Wow! Cedar Hill we really did it I want to say a Big Thanks to @CHLonghorns @cedarhillisd @kmkbenjamin @chrisdotwesley for allowing us the opportunity to come out and represent Cedar Hill. Big thanks to @coaCHhutch92 @LonghornSpeed for literally EVERYTHING:100: pic.twitter.com/d9wBls6EKR

Michael Jitjaeng (Big Sandy) (Sr.) - Jitjaeng is another state champ who was looking for a national title. The Big Sandy thrower and UIL 2A discus champ and shot put runner-up finished ninth with a 54.42 best toss.

Kody Blackwood (McKinney North) (Jr.) - The UIL 5A 300H runner-up had a fantastic race at the NSAF Outdoor Nationals. He ran an elite time of 53.23 to finish fourth place.

Ruben Rojas-Bentanzos (Katy Seven Lakes) (Jr.) - One of the most versatile distance runners runners in Texas at the elite level, this past spring, he proved he can do it all. He ran 15:06.37 in the 5,000m at NSAF Outdoor Nationals.

Solomon Washington (Round Rock Stony Point) (Sr.) - The senior didn't compete much during the outdoor season, but gave things a shot at the NSAF Outdoor Nationals. He was able to pop a 23-01.25 jump to crack the top 10 and finish eighth.

Brianna Brand (Kennedale) (Sr.) - Brand was the UIL 4A long jump champion and competed for a national title at the NSAF Outdoor Nationals. She was able to get a competition best jump of 19-3.25, good enough for fourth place.

Skyler Schuller (Coppell) (So.) - Schuller is the ultimate athlete, especially in track and field. Her trip to the NSAF Outdoor Nationals was the typical do-it-all track meet for her. However, her pole vault competition was just about top notch height wise. The UIL 6A pole vault runner-up didn't PR, but she added another jump over 13-0 with her 13-4.25 to finish fifth overall.

Amelia Flynt (Katy Cinco Ranch) (Sr.) - Flynt, the UIL 6A shot put and discus champion came away with a top 10 finish in the girl's shot put. Her 46-6 was good for an eighth place finish.